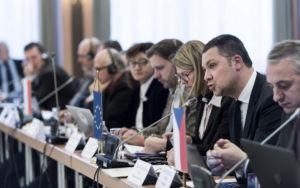 Leading representatives of CMKOS (Czech Republic), FZZ Forum, OPZZ, Solidarnosc (Poland), KOZ SR (Slovakia), ÉSZT, Liga, MASZSZ, MOSZ, SZEF (Hungary) discussed issues of social and economic situation, wage and labour market developments, the state of industrial relations and social dialogue in the region. With the participation of Luca Visentini, general secretary of the European trade Union Confederation and Liina Carr, its confederal secretary discussion took place on the necessary steps for the realisation of the ETUC Paris congress decisions, action programme for the coming 4 years. The participants agreed that the special features of the CEE countries should be taken into consideration in the European social dialogue.

The union leaders exchanged views about the different conditions for collective interest representation and defence and called for meaningful social dialogue at all levels for promoting sustainable economic and social development. To this end decent work and remuneration are key preconditions. The key economic and labor statistics are clearly proving that economic growth,  increasing productivity in the V4 region  have not been resulting the proportionate improvement  in wages and living conditions.

They underlined that concrete measures are necessary to eliminate reasons for poverty that is not decreasing, but is on increase in the region. Increasing number of workers and their families are victims of the “working poor” phenomenon – it is unacceptable and inhuman. Minimum wages must be, or exceed the subsistence minimum. At the same time due attention must be paid to secure healthy and safe working conditions for all workers. To monitor the progress in the area of working and living conditions, a coordinated basket of the relevant economic and labor statistics is needed with the regular valuation of the figures across Europe.

The participants of the V4 meeting stressed that democracy in the world of work is indispensable part of democratic society and labour codes must not be further downsized. We need better regulation for the interest of the working people!

Discussing the issue of the Transatlantic Trade and Investment Partnership, union leaders deplore the lack of democratic and transparent way of these negotiations. They called for maintaining European social standards, enforceable labour rights, exclusion of the subject of public services and the ISDS chapter from the negotiations.

The V4 trade unions support the ILO programmes on Future of Work and the plans for regional dialogues on the four „Centenary conversations” an item introduced by ILO senior expert Grigor Gradev, and expressed their commitment to actively participate in this process.

The trade union confederations expressed their thanks to the Friedrich Ebert Foundation for its support to the meeting.