The European Trade Unions Confederation, ETUC, in its September statement marking the World Day of Decent Work, has condemned the Serbian railway carriage manufacturer Gosa for not paying its workers their wages, breaking the collective contract and refusing to negotiate with unions.

Gosa was named on a list of “global and European offenders” to workers’ right, alongside the Slovak Banking Assocation, the fast food company McDonald’s, Nestle and the low-cost airine Ryanair. 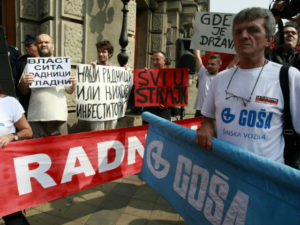 “Workers at the Gosa railway vehicle factory in Smederevska Palanka, Serbia, have been on strike for six months because they are owed 20 months’ salary and employer’s social contributions have not been paid since 2014,” the ETUC statement said.

The Association of Autonomous Trade Unions of Serbia, a member of the ETUC, said on Friday that the Confederation and member unions from 39 different countries intended to raise awareness on social networks of the “years of agony” that Gosa’s workers had gone through on the World Day of Decent Work, which is on October 7.

The Association said that it regularly informed the ETUC – whose unions they say have 45 million members – about the situation in Gosa, where workers went on strike for six months because of unpaid wages and labour rights violations.

Gosa was one of the leading manufacturers of railway cars during former Yugoslavia. The Serbian state sold it in 2007 to Slovakia’s ZOS Trnava company.

Over 350 workers of Gosa have not received salaries regularly for three years. The company’s bank account has been blocked since 2014 because of a 1.8 million euro debt to the state and to suppliers.

Public attention in Serbia was drawn to the situation in Gosa after a worker, who had not been paid for 15 months, committed suicide because of his family’s poor standard of living.

This spurred Gosa workers to go on strike. The dispute ended in September with each worker receiving 30,000 Serbian dinars, worth around 250 euros.