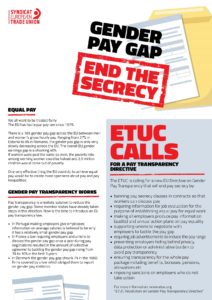 We all want to be treated fairly.

There is a 16% gender pay gap across the EU between men and women’s gross hourly pay. Ranging from 27% in Estonia to 8% in Romania, the gender pay gap is only very slowly decreasing across the EU. The overall EU gender earnings gap is a shocking 40%. If women were paid the same as men, the poverty rate among working women could be halved and 2.5 million children would come out of poverty.

One very effective thing the EU could do to achieve equal pay would be to create more openness about pay and pay inequalities.

Pay transparency is a realistic solution to reduce the gender pay gap. Some member states have already taken steps in this direction. Now is the time to introduce an EU pay transparency law.

The ETUC is calling for a new EU Directive on Gender Pay Transparency that will end pay secrecy by: