CELEBRATION OF 1ST OF MAY, THE INTERNATIONAL LABOUR DAY – SSM

The Federation of Trade Unions of Macedonia marked 1st May – the International Labor Day organizing a Union march with the motto DIFFERENT WAYS, ONE GOAL!

The trade union march started at 10.30 and was attended by more than 3.000 members of the trade unions affiliated in CCM, workers and citizens of the Republic of Macedonia.

The march continued in front of the Parliament of the Republic of Macedonia where Ivan Peshevski, Deputy President of SGIP and the representatives of the Youth Section in CCM, on behalf of the Federation of Trade Unions of Macedonia, presented the requests in the direction of realization of labor rights, preparation of a new Labor Law, higher wages, annual leave allowance for all employees, stop to the increase of the retirement age limit, safe workplaces, stop to the mobbing, stop to the illegal work and informal economy, better General Collective agreement for the private and public sector…)

After that the unionists from the unions affiliated in the union platform Solidarnost joined the Mach of CCM in front of the Parliament of the Republic of Macedonia. 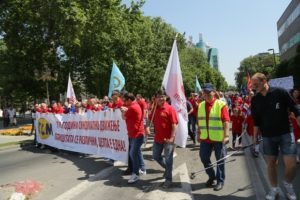 The workers, trade unions and citizens of the Republic of Macedonia continued their march to the Government of the Republic of Macedonia where the President of CCM, Dimovski addressed the public and presented the 15 trade union requests from the Proclamation. The President Dimovski emphasized that this is a new beginning in the direction of restoring trade union trust. We shall deal with everyone who shall try to betray workers and the unions, said Dimovski. He also pointed out that nowadays, celebrating 110 years of trade union movement, the unity of the unions is more than welcomed and necessary, especially in a period when the working class is strictly divided, unorganized, when the working class does not represent any threat to the authorities and employers, when the workers do not even think that they have the right to any form of resistance, even in the defense of human rights, not only in the defense of labor rights, when there is a dominant position of the world syndrome “disciplined character in crisis”, when workers are ready to accept less favorable working conditions just to keep their jobs, when part of the management of the unions were put in the service of the regime. That’s why this shall represent a new era, a new beginning in restoring the trust of the unions and we are more than ready to deal with all those who will betray the interests of the working class.