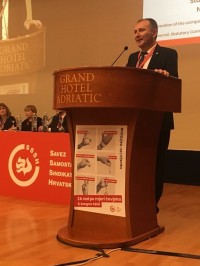 Novosel, The Eighth Congress of the UATUC

The Eighth Congress of the UATUC, held under the slogan „For Work Fit for People“, took place in Opatija from 22nd till 24th November 2018, gathering 105 delegates from 25 affiliated branch trade unions, and a number of domestic and international guests.

The delegates to the Eighth Congress re-elected Mladen Novosel as the UATUC president for the new term of four years. Out of 100 delegates who took part in the elections, 95 voted for Mladen Novosel, while five ballot papers were invalid.

Members of the UATUC Statutory Commission and the Supervisory Board were also elected.

Work Fit for People is a realistic goal and a fundamental right of every human being. However, in Croatia it will not be achieved of itself. We need to fight, and win the Work Fit for People, together – by influencing the legislation and public policies, but also through trade union work at the company level. Every time we protect the rights of only one union member, every time we win new collective agreement through bargaining or we try to influence the changes to a law, we are working to come a step closer to our objective, better jobs and fairer world of work in Croatia, said the UATUC President, Mladen Novosel.

The Congress was preceded by a briefing for international guests, when the UATUC President Mladen Novosel, together with Dijana Šobota, Executive Secretary for International Relations and Organizational Development, and Darko Šeperić, Executive Secretary for European Affairs, Projects and Education, informed the guests on the current situation in the UATUC and Croatian trade union movement, as well as in Croatia in general, including the UATUC priorities for the next Congress period. 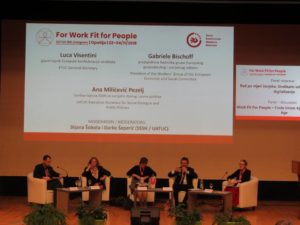 In cooperation with the Friedrich Ebert Foundation, the UATUC organized an international panel discussion “Work Fit for People: Trade Union Agenda for Digital Age”, with panellists including Luca Visentini, ETUC General Secretary, Gabriele Bischoff, President of the Group II of the European Economic and Social Committee and Ana Milićević Pezelj, UATUC Executive Secretary for public policies and social dialogue. The panel discussion focused on the challenge of ensuring quality jobs in a changing world of work and on the role of different levels of trade union work.

Following the held Congress, and in line with the UATUC Statute, the UATUC Vice-Presidents and the Secretary will be elected at the Council session to be held in January 2019, following the proposal by the UATUC Executive Committee (a body which replaced the former UATUC Presidency).