Under the organization of the Mladi Plus Trade Union from Slovenia and ETUC Regional Project Office from Belgrade with the financial support from the French Trade Union CFDT, young trade unionists from the territory of the former Yugoslavia met in Ljubljana, Slovenia on 5 December 2019. The representatives from Olaf Palme Centre Sweden, German trade union DGB as well as from Transparency International Croatia were also presented. The main aim of the workshop was to exchange experience and related data on corruption in home countries, discuss and further develop regional campaign of the young trade unionists in order to tackle corruption as one of the biggest problems that transitional societies face. 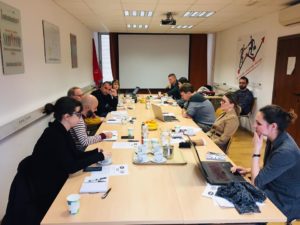 During the first part of the workshop, the participants presented responses on the questionnaire established in order to generate relevant figures on the anti-corruption situation in the region. Also, the representative from Olaf Palme Centre, Aida Alic, presented current and previous projects associated with the anti-corruption in the Balkans. The Transparency International Croatia, Dubravka Budimir had presentation on the importance of the anti-corruption agenda during EU Accession Process in Croatia and region.

The young trade unions concluded that during the first half of 2020 the campaign entitled Transparency at the work place/ labour market should be organized and exercised. The idea of the campaign would be to connect labour related issues to corruption agenda particularly nepotism at the work place, mismanagement related to health and safety at the work place and gray economy. The campaign will be implemented in cooperation with relevant civil society organization.