First cooperation agreement between the ILO and Montenegro

First cooperation agreement between the ILO and Montenegro 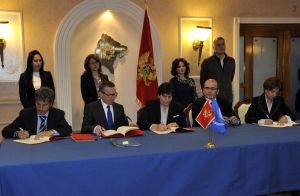 BUDAPEST (ILO news) – The three year programme between the ILO and Montenegro was signed by Minister of Labour and Social Welfare Zorica Kovačević, ILO Regional Director for Europe and Central Asia Heinz Koller, and heads of employers and workers organizations on 8 April 2015 in Podgorica, Montenegro.
.
The programme, developed through a participatory process involving the Government, and nationally representative workers’ and employers’ organizations, centers on three key priorities.

The first priority seeks to enhance social dialogue. The ILO will offer support to strengthen the capacity of social partners and to improve the functioning of the Social Council. The ILO will provide technical assistance in the preparation of the draft Labour Law with the aim of harmonizing it with the EU directives and ratified ILO conventions. Technical and professional capacities of the Agency for Peaceful Settlement of Labour Disputes will be improved in order to reach a better settlement rate of collective labour disputes in the fields of strike and harassment at work.

The second priority will focus on promoting employment and an enabling environment for sustainable enterprises. The ILO will develop capacity of its tripartite partners to improve, design and implement gender-responsive measures to prevent early-school leaving and ‘drop-out’ through evidence-based policy design, assessment and survey. Government officials will be trained on the methodology for a school-to-work survey. In addition, the ILO will commission a comparative analysis assessing what measures worked in the region.

The ILO will support Montenegro Employers’ Federation to develop position papers on how to improve business environment. Business perception surveys and “live” indicators of current business climate will be developed and introduced. An ILO methodology entitled Enabling environment for sustainable enterprises (EESE) will be introduced. Other ILO tools for promoting youth entrepreneurship – including business incubators, and social entrepreneurship, also in agriculture – and access to credit will be tested.

The third priority is the formalization of the informal economy. Capacity of labour inspectors will be enhanced in order to improve their capacity to promote and supervise compliance with national labour and social security legislation on undeclared work. A national diagnosis on the informal economy will be produced with UNDP’s support and validated on a tripartite basis by mid-2016. The government and social partners will also undertake an information and awareness raising campaign to promote the benefits of formal economy. Finally, a trade union position policy will be formulated on informal economy in the construction sector.

The new Decent Work Country Programme 2015-2017 is aligned to the goals and targets set out by national development strategies. The implementation of the programme will be regularly reviewed and adjusted if necessary.

According to ILO estimates, the activity rate in Montenegro has been about 53% (15+ age group) in the last 5 years; among women the share of the active population is 43%. Looking at the different age groups, the activity rate among young people is quite low (23% in 2013) and it has decreased steadily from 2007 onwards.

According to an ILO study , informal employment represented around 22.6% of the overall employment in Montenegro in 2010.