This year on 28 April – the World Day for Safety and Health at Work – the union-selected global theme is ‘Union workplaces are safer workplaces’. 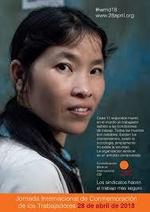 “Worldwide, poor working conditions kill a worker every 11 seconds. All these deaths are avoidable, yet the body count is increasing”

“Worldwide, poor working conditions kill a worker every 11 seconds. All these deaths are avoidable, yet the body count is increasing”, warns Sharan Burrow, the General Secretary of the International Trade Union Confederation (ITUC).

Latest estimates from the International Labour Organisation, released in September 2017, showed work-related fatal injuries and diseases worldwide have increased from 2.3 million to 2.78 million per year. Most – 2.4 million deaths per year – are the result of occupational diseases, not accidents.

In the EU, more than 3,700 workers die in occupational accidents each year and there are more than 200,000 deaths as a consequence of work-related diseases.

“Behind each of these statistics is a life cut short, a family bereaved”, commented Esther Lynch, the Confederal Secretary of the European Trade Union Confederation (ETUC) dealing with occupational safety and health.

In a statement released on the eve of the World Day for Safety and Health at Work, the ETUC stresses that unions – and union safety representatives – really do make workplaces safer.

“Union safety representatives know the workplace realities. They are better informed and more aware of what really goes on at a day-to-day basis and they identify risks long before management”, added Mrs Lynch. She also called on the EU “to renew the commitment to genuinely empower them to act decisively in all workplaces”.